I’m coming to the end of my holiday in South Africa. Over the past couple of years I’ve made several trips here as it’s the country where my partner grew up and where his 95-year old father still lives. This visit we spent some time in the mountains and also in a game reserve. There, elephants blocked the road and we waited and watched whilst the elders foraged on branches and the young males joshed one another. Later, as we ate brunch, a herd of wildebeest clustered around a salt lick, just yards away, and a group of zebras ambled past. My favourite moment came when
a lone ostrich sashayed onto the scene and drank at the waterhole, crooking its U-bend neck as it swallowed… so slowly…so pensively. It’s winter here, but despite that, we’ve swum outdoors at a spa and I’ve wandered around in a summer dress, with bare legs. Locals complain about the cold but for me it has been like a series of perfect English Spring days.

This is a stunning country with the second largest economy in Africa. But as we all know it has a harsh past and even now, 21 years after the end of the awful apartheid regime, a quarter of the population are unemployed and live on less than 80p per day. At city traffic lights, or robots as they’re called here, there is nearly always at least one beggar, and often more. Some try to attract attention by moonwalking or miming extravagantly and others just drift slowly amongst the cars, clutching their possessions in a plastic bin bag. I’ve seen an occasional white face but the overwhelming majority are black.

Despite a growing black middle-class and affirmative action which aims to distribute employment opportunities more equally amongst the nation’s racial groups, I am sometimes uncomfortable, here. People are in general, genuinely warm and friendly but I’ve sensed amongst some older black hotel workers and filling station assistants, a deference which seems rooted in a history of oppression. But it’s different for the younger generation, the so-called ‘born-frees’ who grew up without experiencing segregation and constitutional inequality. Recently I had an encounter with a young black waitress and asked if it was possible to have soya milk with my coffee. “We ain’t got no soya milk” she said with a disdainful toss of her head and her casual attitude came as a relief.

The new South Africa has the challenging task of integrating a diverse range of needs and sensitivities. This is reflected in its official languages. There are 11. This is in a different league to Bolivia which has 37 official languages, but it’s clearly still a lot and presents predicaments. English is widely spoken and is the language of public life, science and commerce, but nonetheless it’s the native language of only about 10% of people in this country. Zulu, Xhosa and Afrikaans are each more common first languages.

One way that post-apartheid South Africa has tried to represent its people better is to change place names. As well as trying to represent indigenous names there have been a number of other situations to take into account. Some names were offensive racial slurs. There were also many airports and public places that were named after prominent apartheid-era figures. Mandela was cautious and took the process slowly; careful in his reconciliation policy to be inclusive and avoid a rapid replacement of the apartheid-era names with liberation luminaries. But President Mbeki who followed, expressed impatience at the slow rate of change. Now, some years later many names are different. For example, Stanger, Northern Transvaal and Pietersburg have respectively become KwaDukuza, Limpopo and Polokwane. And Pretoria, one of South Africa’s three capital cities, was renamed Tshwane in 2005. However, the white residents protested and so the city administration department backtracked. Their solution was to decree that the metropolitan district would be known as Tshwane whilst the city would continue to be called Pretoria. 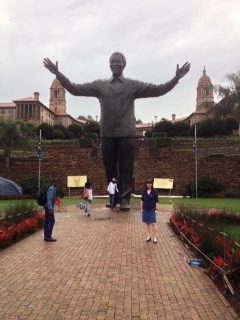 A giant of a man – statue of Mandela in Pretoria

So it would be misleading to imply that this process is taking place without controversy. But notwithstanding the inevitable difficulties, name changing can be a powerful tool in moving forward and healing painful sores. I had my own small experience of this when my marriage ended. It was hard to be nominally linked to someone who didn’t want me in his life so I changed my name by deed poll to one I chose myself. This was an important step in growing into a separate and independent person.

And now at the end of this holiday I find myself with a new dilemma. This time it’s a rather pleasant one. Last week my lovely partner asked me to marry him. I had no hesitation in saying ‘yes’. But I shall have to think harder about the next question. What will I do about my name?