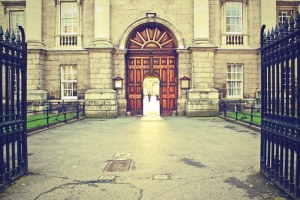 Dublin has been on my list for a long time and last weekend I finally got there. It was a treat timed to coincide with my birthday and one of the benefits of living only ten minutes from an airport, is that we were in the city centre in time for breakfast. Unlike many of the things I’ve longed to do, I had no preconceptions. I was simply curious about this nearby capital city.

We started with a guided tour and walking through an archway into the huge, elegant courtyard of Trinity College was a stunning moment. From there our guide swept us through the key events in Dublin’s history. I knew so little about Ireland that the details were new to me but it was no surprise that Catholic oppression, famine and British domination cropped up a lot. They were not happy stories and eventually we got to the Easter Rising of 1916 when Irish Republicans decided they’d had enough and laid siege to Dublin in order to try and free themselves from British rule. Our guide was erudite and enthusiastic. The tour should have lasted two hours, but we got nearly four. Half-way we stopped for coffee at the Irish Film Institute, a cosy respite from the torrential rain. We squashed around a table—an Irishman, an American, a German, a South African and me—and we talked about the state of the world. There’s a lot going on at the moment.

The next morning we went to Kilmainham Gaol where we sat in a sombre small chapel and heard about Joseph Plunkett, one of the leaders of the Easter Rising.

His last wish was to marry his sweetheart, Grace and this was granted. They had ten minutes together, and then two hours later Joseph was executed by firing squad. Our tour ended in the stark Stone Breaker’s Yard where he and thirteen of his fellow rebels were shot. After execution the bodies were taken to a mass grave and covered with quicklime. James Connolly was one of these. He had been badly injured in the Rising and wasn’t expected to live long but nonetheless, he was brought from hospital to the prison, strapped to a chair and shot. The guide told us many similarly cruel stories. I also learned that initially, the Rising was unpopular in Dublin but that the harsh reaction of the British Army shifted public opinion. People were outraged and changed from being merely hostile to the British presence to supporting militant action against it. What followed were bloody years of conflict with a War of Independence and a Civil War.

On Saturday evening we joined a literary pub crawl. As I sat waiting for it to start I felt a tap on my shoulder. ‘Hello,’ said a young man. ‘Where are you from?’ He was up from Kildare for the evening and told me about the difficulties of getting work in rural Ireland. Then two actors led us through narrow streets whilst introducing us to the lighter side of Dublin’s most famous literary offspring: Wilde, Beckett, Yeats, Behan and Joyce. At the end, in the fifth pub we stayed on until midnight, deep in conversation with a friendly Dublin couple. We debated the current state of the world. There’s a lot to talk about.

On Sunday morning in the Hugh Lane Gallery I went into a long room of Irish portraits. Over the past few days I’d heard about a number of people whose names appeared here—either them or their relatives. Recognising them gave me a small, satisfying sense that I was beginning to understand something of which I had been so ignorant.

Just before we left for the airport, Niamh our charming Airbnb hostess made a pot of tea and we told her about the Lucien Freud exhibition we’d seen, the great meal we’d had in a converted church, and the interesting people we’d met. I told her how glad I was to have learned something about Irish history. She talked enthusiastically about one of her heroines—Countess Constance Markievicz who was found guilty of treason in the Rising but wasn’t executed because she was a woman. On one occasion she went straight to a meeting after going to the opera and was photographed for a ‘Wanted’ poster wearing a ballgown, tiara and pearls. She’d advised her fellow women on how to prepare for rebellion—‘Dress suitably in short skirts and strong boots, leave your jewels in the bank, and buy a revolver’.  In 1918 she became the first woman to be elected as a British MP but in accordance with Sinn Fein policy, she didn’t take her seat. During the course of her life she gave away all of her wealth and died in penury at 59.

Then the conversation moved onto current world politics. Niamh had been to Maine just before the American election and spoke of her shock at staying in a small town where the signs of recession were impossible to ignore. The town had recently lost most of its timber industry to Canadian competition and only one shop in four was open. She made it clear that she wouldn’t have voted for Trump, but she did remark that after this visit she could see why the people there would want protectionist policies. ‘We need to understand both sides,’ she said. Hearing that in Ireland, was affecting—the Irish know about hard times. They’ve been on the receiving end of a lot of harsh treatment.

Despite my focus here on the sober side of things, it was a really happy weekend. Great company, good food, and lots to see. But there’s no getting away from the history when you visit Dublin. And this weekend there was no getting away from current politics, either. Trump has started his presidency with a harsh approach. The issues are quite different from those in Irish history but human response is predictable. When people feel oppressed they get angry. That usually doesn’t end well. I worry about many things these days and now there’s a new one to add to the stash. Has the new president ever studied history?

3 thoughts on “There’s A Lot To Talk About”