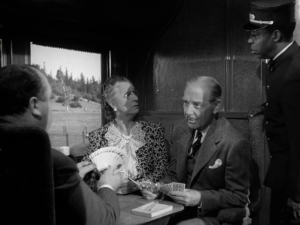 “Mum,” said Henry the other day, giving me an odd look, “Is everything alright?” “Yes fine,” I said, briskly. “Why?” “It’s just that I was in the kitchen and happened to look at your list. It said, Clean bathroom—Hang out washing—Buy anti-snoring device—Get fence mended—Murder!”

By the latter part of this week, I’d done all of those things and had a new list: Take parcels to post office—Contact dentist—Ring Barbara—Buy vitamin tablets—Blackmail. 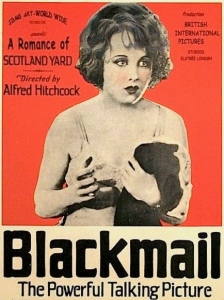 This week in amongst various other activities, I’ve completed Treat Number 41: watching Alfred Hitchcock’s films. A couple are lost but fifty-two have survived and I’ve now seen them all. There’s a wide range: from 1925 to 1976; silent to talkie; black and white to technicolour; horror to musical; British to American; outstanding to relatively forgettable, and Blackmail to Murder! The exclamation mark is Hitchcock’s not mine.

I watched most of these films on my own, often in moments when I should have been doing something else. They felt like stolen treasure. And as so often with treats, this one spread its wings beyond the original idea. I read Peter Ackroyd’s biography of Hitchcock, and went to the cinema to see the recent documentary about the Truffaut interviews. There’s the enjoyment, too, that comes from sharing the enthusiasm with friends. Alan, if you’re reading this, I look forward to continuing the conversation we started last year. I’m now better informed so will have more to say. 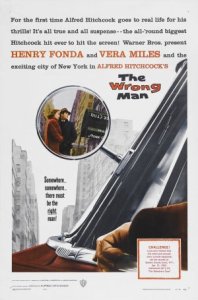 The highs and the lows? Those that made the least impact were Jamaica Inn, Secret Agent, The Paradine Case, Under Capricorn, Juno and the Paycock, and Family Plot. But there were plenty of pleasures amongst the rest. Favourites include The Lady Vanishes (the true star is a steam train which puffs its way through pre-Second World War Europe), The Wrong Man (based on the true story of a decent man who is wrongly convicted of armed robbery and is played impeccably by a dazed Henry Fonda), Shadow of a Doubt (a strong plot and possibly Hitchcock’s own favourite), The Manxman (a powerful silent film about a love triangle) and Sabotage (engaging scenes of pre-war London and a moment that leaves you reeling. Even Hitchcock wondered whether he’d gone too far). But it’s Vertigo that I love best. I went to see it at our local Picturehouse cinema recently and the images, music and plot haunted me for days afterwards. 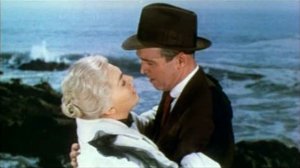 One of the intriguing things about Hitchcock is that he didn’t always provide audiences with feel-good endings. Some of his films have shocking final scenes. Another is his use of suspense. Psycho and The Birds make audiences scream, but in many of his works the hooks are more subtle. In the silent film Easy Virtue, adapted from a Noel Coward play, there’s a scene where the audience knows that a man is phoning his girlfriend in order to propose. Hitchcock chose not to show these characters at this point, but instead filmed a telephonist who listens in on the phone call. Her expression reveals what’s happening and builds suspense while both she and the man wait for the girlfriend to make her mind up. 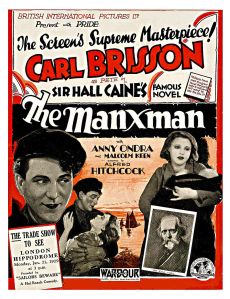 Like most creative geniuses, Hitchcock had some unusual habits. One of the oddest was that every day on set he would drink his tea and then throw the cup and saucer over his shoulder. He had complex attitudes towards his leading ladies and he almost certainly had crushes on a number of them including, famously, Tippi Hedren. But in spite of that he was devoted to his wife Alma Reville who was just one day younger than him. He trusted her judgement implicitly and she worked on many of his projects as a screenwriter and editor.  They got engaged after he proposed to her during a terrible storm at sea. She was prostrate with seasickness and told their daughter years later that ‘I was too sick to lift my head off the pillow. I groaned, nodded my head, and burped.’ They were married for fifty-three years and she was lost when he died, as he would have been had she gone first.

A number of themes crop up again and again in Hitchcock’s films: trains, dominant mothers, secret lives, likeable criminals, obsession, murder, and blonde women. He also loved dogs so if one of his characters owns a dog it’s a strong clue that they’re of sound character. 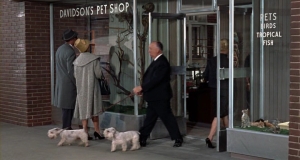 And just like Hitchcock, all writers have themes that preoccupy them. Hemingway’s include fear, guilt, betrayal and loss. For Hardy, it’s the damage caused by social constraints, and the role of chance in people’s lives. And JK Rowling’s writing centres around themes of mortality and morality. 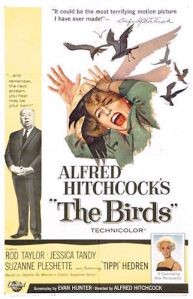 Within the next fortnight, I shall become a published author too, so I’ve had a think about what my preoccupations might be. At the moment I’d say they are individual differences, coping and the unexpected twists and turns of life. Lists crop up a lot too. 31 Treats And A Marriage will be available through Amazon and other booksellers by the end of the first week in May. My previous post has a link to an audio recording of the prologue. If you’d like some more you can listen to Chapter One. Just click here. I do hope that you enjoy it. 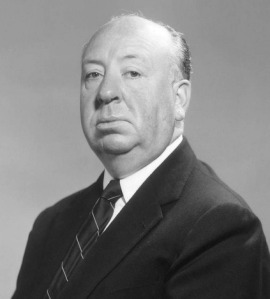 Recently I spent a contented day walking a stretch of the North Downs Way in Kent. This 156 mile walk runs from Farnham to Dover and I’ve been doing it in stages for the past couple of years, sometimes with friends or family, but often on my own. This time I’d had a break of nearly a year and it was a treat to resume it and to walk through cornfields, along wooded ridges and down deserted dusty lanes, all alone. It was a rare bit of peace and a chance to appreciate the capriciousness of English weather. The sun seared my face and then shortly afterwards a smattering of drizzle chilled me.

I’ve got two long distance walks on my list of sixty treats. This one and the South West Coastal Footpath. On these kind of walks you can keep putting one foot in front of the other and for a while you’re relieved of having to think about life’s usual worries. You know roughly what’s going to happen next, but there’s always the pleasure of wondering what precisely is round that bend that you can see in the distance.

On this occasion as I walked through deepest Kent, I pondered what to write for my next blog post and settled on the unexpected benefits of treats. Some of those I’ve done so far have required me to try new activities or to tackle unfamiliar subjects and there’s plenty of research which suggests that mental activity can help to stave off forgetfulness.

This is becoming increasingly relevant. When I was young I could easily remember names, addresses, dates and all manner of other bits and pieces. I couldn’t imagine what it was like not to be able to retrieve them but this is one of those things that it’s hard to understand unless you’ve experienced it. Like gout, labour pains and carpal tunnel syndrome. Now I know about forgetfulness only too well. It’s getting on for a year since I moved house and I still can’t remember the names of any of the roads around me. And yet in my head I can easily walk around the streets where I lived thirty years ago.

One of my other current treats is to watch all of Hitchcock’s films and this is certainly giving me some mental stimulation. He’s often cited as the most influential director of all time and was noteworthy for the way he played with his audience and for the detailed control he exerted over all aspects of his films. There are over fifty to enjoy and so far I’ve watched six. The most recent of these, Stage Fright was interesting because it starts with one of the main characters telling a story in flashback. It’s only at the end that the audience discovers he was lying. This kind of manipulation would be thought clever now, but in 1950 viewers felt cheated and Hitchcock considered it to be one of the major errors in his long career. 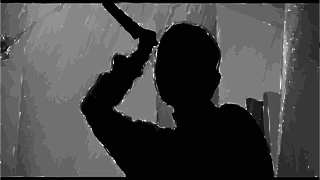 In the warm Kentish sunshine my mind wandered to these films that I’ve seen recently and to other Hitchcocks that I’ve seen in the past and will revisit as part of this treat. As I reflected and walked down a track, I noticed a tractor going up and down in the distance. Up and down. Up and down. There was a light breeze and everything felt very still. Very quiet and rather sinister. A small plane circled in the sky above. Round and round. Dipping and diving. Apparently aimless. Or was it? Was I imagining it or were there more birds around than usual? 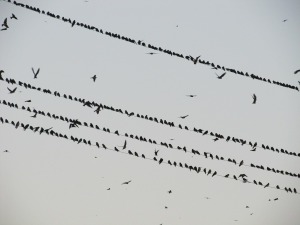 This was no good. An enjoyable walk-treat was being sabotaged by an equally pleasurable film-treat so I distracted myself by trying to remember what I wanted to write about in this next blog. But there was just an empty gap in my head. 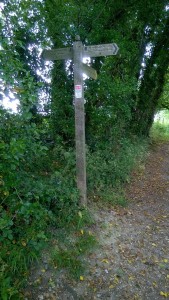 Fortunately I eventually remembered that this current blog was meant to be about forgetfulness. And I also remembered this entertaining video which sums up age-activated attention deficit disorder. It makes me laugh and I hope you enjoy it too. It’s well worth spending three minutes on, but I suggest you watch it straightaway or you might forget.