Last week we escaped the December chill and snatched a week in Lanzarote. It had never particularly appealed to me, but it turned out to be a strange, unearthly place, and we loved it. Volcanic eruptions have shaped the island and at least a quarter of it is covered in bare, craggy lava. We walked along the black sands of secluded coves, ate in a restaurant where the food is barbecued over a volcano, and descended deep into the earth to explore cathedral-like caves. The more predictable pleasures were the golden beaches, the warm ocean and the delicious Spanish food. As I write this I’m remembering that this time last week I was in a summer dress, squeezing lemon over a plate of superbly fresh fish, and watching the surfers ride the breakers.

But all good things must come to an end and my attempts to forget the Christmas preparations were dashed on the plane coming home. I flicked through the EasyJet magazine and came across an article about the Italian food laboratory, Wood*ing. It does research into wild food and had some unusual suggestions for festive delicacies; in particular, how to make good use of your Christmas tree. I learned that the needles are ‘citrussy and bitter’ and can be used in place of rosemary; that pine cones are ‘perfect for making soup’; that the sap can be ‘whisked into risotto or pasta’; the inner trunk can be dried out and ground into baking flour, and most exciting of all I discovered that you can boil fresh bark with salt and oil to make a ‘tasty broth’. 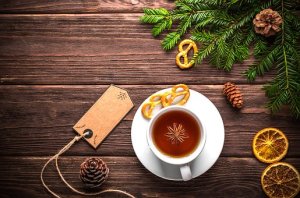 Hmmm, I’m not sure about that. Our family Christmas has tended towards the traditional. For many years, Christmas lunch had a fixed formula: turkey, roast potatoes, roast parsnips, sausage and bacon rolls, carrots, peas, Brussels sprouts, stuffing, bread sauce, gravy, Christmas pudding, mince pies, brandy butter and cream. Always followed by a family walk into the dying daylight, and games in the evening. We stuck to this rigidly because it was our own particular way of doing things; our set family culture. But when I met my new husband and we took our first steps towards becoming a blended step-family we faced some challenges. Not unreasonably, they had their set way of doing things too. Family culture is a strong force. It’s about familiarity and security, and it’s also an expression of identity.

Last year was the first time that we celebrated together as a new family and my husband and I tried to find ways to keep both styles of Christmas alive. But it was much harder than we anticipated and whatever we suggested resulted in someone feeling hard done by. We struggled to decide what to do about this unavoidable need to adjust, and then hit upon what we thought was a brilliant idea. Instead of clinging to the old, we would start to make a new family culture and do something completely different: a Christmas curry. Everyone concerned enjoys spicy food, and it would provide an opportunity to make lots of different dishes spanning a range of tastes and dietary restrictions. And given that these restrictions include gluten-free, dairy-free, potato-free, cashew-free, orange-free, and meat-free, then this seemed an excellent solution. Unfortunately not everyone agreed. Initially, our suggestion triggered mutiny and we were flummoxed, but the upset did settle down eventually and the alternative lunch was a big success. 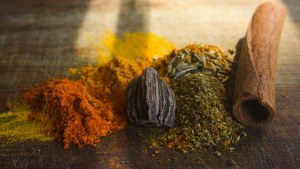 This year our main family gathering will be on December the twenty-third, as that’s the day that we can all make. We wondered about doing curry again but were inspired by our recent holiday and so 2016 is going to be a Spanish Christmas. Everyone can help with the preparation of tapas and I want to recreate the fried Padron peppers that we enjoyed, softly green and bitter and sprinkled with sea salt. There will also be a fishy paella, and then almond cake and even some turron ice-cream if I get myself organised.

I can’t pretend that change has been easy. I was comfortably set in my ways and six years ago if anyone had told me that my life would be so different now then I would have been appalled and scared. There has undoubtedly been loss, but there has also been a great deal of gain. Our family is unexpectedly enhanced. We have welcomed new members, and they have welcomed us. And now that we are establishing different grooves I’m enjoying the challenges of responding to the new. After all, it’s not just second marriages that throw up these complications; family culture changes naturally anyway, as children grow up and introduce partners into the mix.

Right now, there’s plenty to do. The sunny memories of our lovely holiday are fading and instead my head is crammed with Christmas lists. Amongst the many ‘to-dos’ is the thought that we’ve got no decorations up yet and several rooms are still cluttered with half-unpacked boxes from our move. I want it to be a special celebration this year as it’s our first married Christmas and the first in our new home. If that’s going to happen then I need to get busy as we have a full house from Thursday evening.

And there’s a particular problem to solve—where to put the Christmas tree. With so many people in the house, there’s not a lot of room. Perhaps we’ll just have to eat it, after all.

2 thoughts on “How to Eat Your Christmas Tree”