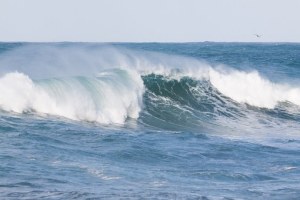 This week I got out my pink highlighter pen and crossed another treat off my list. Each time I do this I get a rush of satisfaction from solving a mystery. When I made the list six years ago, I had no idea how each of these sixty wishes would come to fruition and what the experiences would be like. I recounted the stories of thirty-one of them in 31 Treats And A Marriage, and since then I’ve carried on enjoying the remaining twenty-nine. I’ve done most of the at-home or close-to-home ones like horse riding lessons, planting some old-fashioned roses, and reading Middlemarch but there are still thirteen left and they include more demanding adventures such as Japan and an American train journey. Some are already in progress; I’m part-way round the glorious 630-mile South West Coastal Footpath, and can hardly wait to resume it next weekend after a break for the winter.

As each treat goes through metamorphosis from unknown prospect to memory, its personality is revealed and the mystery is solved. By then I know where it fitted in, and what it was like. In the beginning, they were simply things that I wanted to do whilst I was still fit enough to do them but I had no fixed plans. And that turned out to be lucky, as soon after, my life turned into a stormy sea that heaved with overwhelming events. During that time, the treats provided an anchor. Thankfully, life is much calmer now and the sun has come out.

One of the remaining twenty-nine treats has been to ‘get a clock with a nice tick.’ That ended up on the list because
as a teenager I sometimes stayed with friends in Edinburgh. They had lived in their large, elegant Morningside villa for many years and it felt solid and established. I particularly loved coming back after an evening out when the house would be dark and quiet, apart from the sound of an old clock ticking. It was reassuring and homely.

I did have a clock of my own for many years but we had a tetchy relationship; I got it overhauled several times but it stubbornly refused to work reliably and was an ongoing source of frustration. Eventually I gave up and sent it to auction, where it failed to sell and so the auctioneer disposed of it. That was the end of an unhappy horological affair but I still wanted to fulfil my treat and find a clock that was a source of pleasure. As always, I had no fixed plans so I put the idea on hold. Then one day, last autumn, I was helping my new husband clear out his loft. We opened a cardboard box and there inside was a wooden mantle clock. It didn’t look particularly exciting and he couldn’t remember where it had come from, or even if it had ever worked. We wound it and did a bit of tentative exploration; we gave a little push on the pendulum and it moved back and forth a few times, and then stopped. We tried again but it clearly didn’t want to be coaxed back to life so it sat for several months in a dark corner while we ignored it. Then one morning I woke up with a rush of enthusiasm. I looked on the British Horological Institute website to find the nearest accredited clockmaker, put the clock in a shopping bag, and drove across the city to a dark little shop in uncharted territories.

The clockmaker was elderly and wore fine wire-rimmed glasses just as I’d imagined. He didn’t say much first of all, but fiddled deftly around inside the clock. “Is it worth repairing?” I asked. “And how much will it cost?” “I can certainly get it working,” he said. “It’ll be about three hundred and fifty pounds.” “Hmm,” I said, as I couldn’t think of anything more sensible.

We chatted for several minutes about similar clocks that he’d mended and I started to adjust to the idea of spending quite a bit of money. Then he said, “Listen.” And in amongst all the various tick tocks in the shop I heard a calm, mellow tick tock right in front of me. He delved back inside. “And now listen.” There was a pleasing sound of mechanical whirring and anticipatory positioning and then the clock struck five. It didn’t matter that it was actually ten past eleven in the morning. What mattered was that I liked the sound very much. “Look,” he said. “I’ll be honest with you. I’m very busy at the moment. Several other clockmakers in the area have retired so it might take me a couple of months to get around to yours. But I think you might find that it’s alright–it’s still ticking. Strap it carefully into the car with a seatbelt and see how you get on. You can always bring it back to me.”

So that’s what I did. I took it home and placed it on the mantelpiece. To my surprise it looked just right. I set the pendulum going again and moved the hands carefully until they were synchronised with the chimes. My husband came home later and it was still ticking away–a new, comfortable texture in our home. 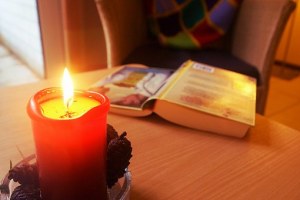 Now, several weeks into my relationship with the clock, it feels like a member of the family. I love to hear it work itself up towards the restrained quarter-hour chimes and then the big bongs on the hour. But sometimes it’s a bit too noisy and I’m glad of the little switch that silences the chimes. We use that if we’re listening to music or watching television. And the other night my husband got up and closed the sitting room door as the ticking was keeping him awake. He said it was nice to know it was there, but it was a bit like shutting a bedroom door on a snoring baby. I’m gradually learning its habits. It needs winding more often than the clockmaker suggested but other than that, it’s undemanding and we’re both delighted with it.

In one way it was the most easily accomplished of all my treats as it just appeared in my life, unannounced. But in another way, it was the most difficult of all. I had to get divorced… go on a writing retreat where I shared a room with an interesting woman… who introduced me to her friend who is another interesting woman… who introduced me to a very lovely and interesting man… who asked me to marry him…and then I helped him clear out his loft. Easy really. And so that’s another mystery solved. 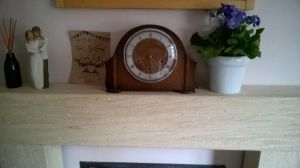 9 thoughts on “The Strangest Treat of All”