One of life’s greatest pleasures must surely be sitting round a table enjoying good food and conversation, and I discovered recently that there’s a word for this—deipnosophy. At its best, the participants learn something about one another whilst gathering new inspirations and gaining a deeper understanding of the world. The oil that’s so vital to this process is the knowledge on both sides that to be interesting it is necessary to be interested. But the magic formula can be elusive.

A couple of weeks ago I had to go to a semi-formal dinner and I was placed next to a retired RAF pilot. First impressions were positive, and he greeted me warmly. I settled down at the table looking forward to a few hours of stimulating conversation. “So what did you enjoy most about flying?” I opened with, innocently. “Well,” he said,
“I—and I— and I—and then I—” (Insert a number of jolly japes plus an awful lot of technical detail). After about ten minutes he paused for breath. I opened my mouth to say something but before my vocal cords could engage, he was off again. “And then I—and then I—and you’ll never guess what happened when I—it was quite incredible—” (Insert more jolly japes, skin-of-the-teeth engineering exploits, and a liberal splash of Far Eastern derring-do).

He paused to take a gulp of wine but this time I was too quick for him. “It’s been a difficult week,” I said. “My father-in-law died on Wednesday”. “Oh dear,” he said brightly. “I remember when my father died. I—and then I— and then I—” By this time I was properly glazed and for the next hour or so, his voice boomed in and out of focus. A couple of times I heard him say, “Now, you’ll be interested in this—” At the end of the dinner, he pumped my hand enthusiastically, bade me farewell, and said, “Well— that WAS an interesting evening.” 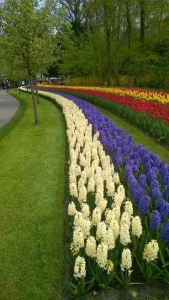 A few days later I set off for a week of travelling around The Netherlands on my own. It’s something I’ve been wanting to do for a while and I soaked up various experiences, mostly centred round water, flowers and architecture. The trains and buses ran with spot-on efficiency and I darted all over the provinces of North Holland, South Holland and Utrecht with spontaneity and freedom. I loved Edam’s canals, the millions of spring flowers at the Keukenhof gardens, the Leiden University Botanical Gardens with the extraordinary jade-green pendulous plants, and the breathtaking free spectacle of tulip fields viewed from the upper-deck of an Intercity train—broad stripes of red, yellow, purple, fluorescent orange, and palest pink.  At the Zuiderzee Museum I learned about floods and dams, and sat in the thin sunshine eating freshly smoked herrings. Rotterdam’s Cube Houses provided a mind bending highlight. I went inside one and saw the challenges of living with sloping walls. The UNESCO-listed Rietveld Schröderhuis in Utrecht was another revelation—like a Mondrian painting on the outside and with sliding walls on the inside for flexible living. 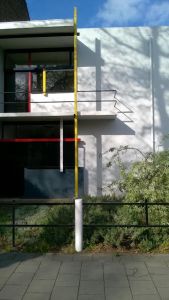 No doubt many of these images will stick with me but overall it was people that made the greatest impression. I chose AirBnB accommodation because it brings surprises and you get to meet the locals. I’ve stayed in all kinds of places doing this, but on this trip I left dry land for the first time and slept on a Dutch sailing ship, moored in a small harbour in North Holland. Glossily wooden and over a hundred years old, it made a surprisingly comfortable home. My cabin was snug and my host provided a fabulous breakfast. It was just me, her and the ship’s cat. We talked easily and I learned about living on the water in Holland, and her childhood in East Germany. She told me what a shock it was when people had to adjust to new economic challenges. There were hardships during the Communist era, but she called it a ‘safe prison’ where people didn’t have to worry about losing their job or their home. Once the Wall came down these became everyday concerns and she described the effects on a generation raised by parents who are scared. We talked a lot. I listened. She listened. 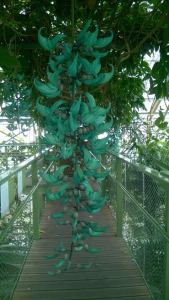 In South Holland I stayed with a charming man. I arrived dishevelled and slightly sweaty after a busy day and he welcomed me politely and asked why I was travelling in The Netherlands. I told him about my past mid-life troubles, the treats and the book they triggered. He listened patiently and asked interested questions. On my last evening he offered to cook me dinner and prepared a meal of basmati rice and tender broad beans, made fragrant with saffron and a large bunch of finely chopped dill. It was delicious and he explained that it brought back fond memories of his native Iraq.

We sat at his dining table and chatted—to and fro like a tennis match. He reminisced about growing up in Baghdad where his father was a successful baker, and his family enjoyed holidays in Switzerland. He talked of Iraq as a clean, beautiful country with many cultured people and a great respect for books. But things started to go wrong when he was nine. Iranian planes flew over Baghdad, bombing nightly for weeks during the Iran-Iraq war. Later came the Gulf War and Baghdad was bombarded again, this time by the US and allied forces, and with even greater destruction.

After his father was killed my host knew that even though it would be very dangerous, he had to escape. All the borders were closed but a sympathetic Kurdish restauranteur helped him into Turkey. Then followed many months in Istanbul where he worked as a waiter for fifteen hours a day, seven days a week. His employers allowed him to sleep on a wet basement floor with many others, all the while saving up the money to go westwards into Europe. Eventually, he made it to The Netherlands with the help of a paid ‘sponsor’ who provided a fake passport and knew how to bribe airport staff. His journey onto the plane was nerve wracking, and when I said, “What if you’d been arrested and sent back to Iraq?” there were no words necessary. He made a quick throat-cutting gesture and that said it all.

After months in detention as an asylum seeker and countless interrogations, my host was granted Dutch citizenship and went to university. The man I met twenty-six years on, is a model member of society, a hard-working professional, a perfect host, and a devoted father to his little daughter. “I am grateful for every day”, he said. “And I feel very lucky”.

We talked about all kinds of things—parenting, happiness, food, travel—such different lives but so many points of agreement. “Well—that WAS an interesting evening,” I said at the end. For the sake of deipnosophy, I hope my host agreed.

Floods on the Zuiderzee

5 thoughts on “The Art of Deipnosophy”